by suchnapatt
in Entertainment & Arts, Lifestyle
0

New Delhi: Goods and Services Tax (GST) revenue in March stood at Rs 97,597 crore, lower than over Rs 1.05 lakh crore collected in February, according to a Finance Ministry statement on Wednesday (April 1). The total number of GSTR-3B returns filed up to March 31, 2020, is 76.5 lakh.

The government has settled Rs 19,718 crore to CGST and Rs 14,915 crore to SGST from IGST as regular settlement. In addition, Centre has also apportioned unsettled balance IGST of Rs 6000 crores on an ad-hoc basis in the ratio of 50:50 between centre and States/UTs.

“The total revenue earned by central government and the state governments after regular settlement in the month of March 2020 is Rs 41,901 crore for CGST and Rs 43,516 crore for the SGST,” the FinMin statement said. 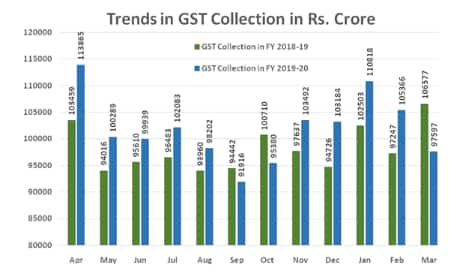 During this month, the GST on import of goods has shown a negative growth of (-) 23% as compared to March 2019.

For the full financial year, 2019-20, the GST for the domestic transaction has shown a growth rate of 8% over the revenues during last year. During the year, GST from imports on goods fell down by 8% as compared to last year. Overall, gross GST revenues grew at 4% over the last year’s GST revenue, the statement added.

Chaitra Navratri 2020: Chant this Durga Aarti for the blessings of benevolent goddess

Chaitra Navratri 2020: Chant this Durga Aarti for the blessings of benevolent goddess

Whatever happened to the NHS contact-tracing app?

Whatever happened to the NHS contact-tracing app?

No Result
View All Result